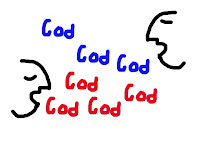 Came across this co-ed article on IHT, by David Brooks. By coincidence I found this blog post , by Jean Kazez, soon afterwards, which is related to belief in God as well.

I do not think I have much nice thing to say about David Brooks. Let’s say I am usually unimpressed by the arguments put foward by David in Shields and Brooks on PBS. Not because he is a Right-wing political pundit per se, but because what his reasoning and arguments are usually not very grounded. I still watched the PBS program because what he has to say, it seems to me, a good indicators of the current conservative sentiments and stances on issues.

But this article, which first appeared in NYT in case you may not know, articulated the issue of the current wave of militant materialism against the Religion rather well. Two outstanding icons in this movement are Richard Dawkin and Christopher Hitchens.

My primary reservation about Richard and Christopher’s position is: If we apply reduction blindly, and dismiss phenomena in the field of spirituality rather offhandedly, then go on to brand people on opposite side as delusional or stupid, then it is not a scientific approach to study a problem.

God exists or not? I like to compare this question to the study of nature of light back in the 17th century. Issac Newton believed light is particle but Descarte thought it is wave. Do you think one side has a particular right to brand the other side delusional and stupid? We should always keep in our mind the limit and boundary of human knowledge and intelligence.

Jean’s article has given his view on the reasoning and response from both side of the argument. I agree with the fact he pointed out: both sides are so ready to throw in stock arguments.

Overall, between the Militant Materialism and the Militant Evangelicals, there is no dialog going on. Just publicity grabbers grabbing for publicity.

A proof of the lack of depth: do take a look at how Christopher Hitchens debated his view against Kenneth Miller in the Templeton Conversation.

I was mildly offended when Christopher probed Kenneth’s religious background. (Out of the blue, he bought up the question, “Incidentally, are you a Christian?”, to Kenneth) While it is an effective debate technique, i.e. to highlight one’s board identity in order to imply the innate bias, and hence invalidity, in his/her reasoning. It is not right in this debate especially when the opponent is sincere and candid in the discussion.